The tulip above here has six petals but tulips can have any number of petals – three or six or seven or even ten petals like the one below. 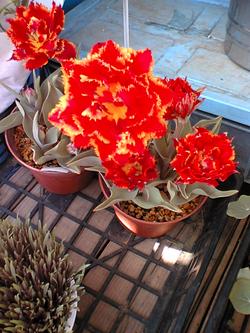 Interesting fact: When you plant tulips from seed (not bulb), the tulip only has one leaf at the very beginning. By autumn the leaf dies. During the second year, the bulbs get a little bigger and the leaf gets bigger too but the plant still has only one leaf. Until the fourth year, the bulb still has only one leaf. By the fifth year, more leaves emerge and the flower finally blooms. 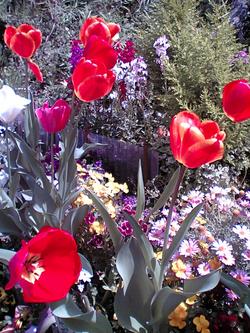 Another interesting fact: If you plant a seed from a pink tulip, you might not get a pink tulip because the tulip flower could have been mixed with pollen from that of a different colored tulip. So to know what you’re getting, plant a tulip from a bulb.

They’ve opened, they’ve opened,
The tulip flowers.
All standing in a row,
Red, white and yellow,
Every one looks so pretty!

Tulips are a welcome sign of spring, and although Holland is famous for its long love affair with them, the Persians and Turks celebrated the beauty of these flowers in poetry and paintings more than 1,000 years ago. The superb gardens that Suleiman the Magnificent (1495-1566) created throughout the Ottoman Empire, for example, reflected the Islamic vision of Paradise, and as well as flowing water and fruit trees they had fragrant beds of roses, carnations and tulips. In those days, people loved tulips with slender flowers and petals that flared outward at the tip. Most were shades of red, and if a young man gave his sweetheart a red tulip with a dark center, it meant, “I am on fire with your beauty, and my heart is burned to coal.” European travelers first saw cultivated tulips in the gardens of Constantinople (now Istanbul), and a French enthusiast, Carolus Clusius, who worked in Holland in the 16th century, became the father of Dutch tulip cultivation. Curiously, it is a virus introduced into some strains that creates the attractive streaks on their flowers, as well as the feathery petals of the so-called parrot tulips.