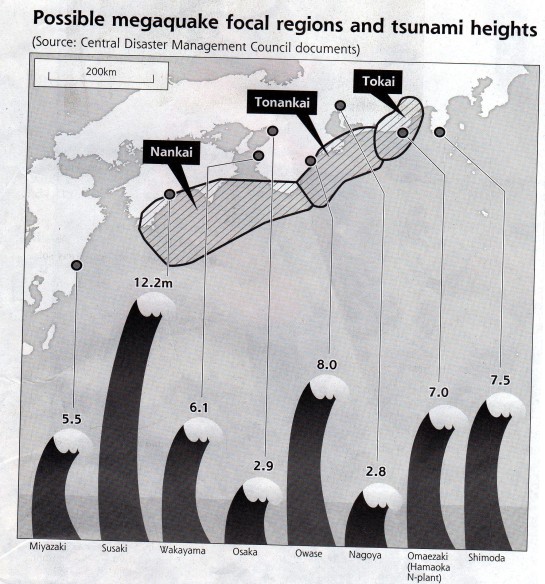 Chubu Electric Power Co.’s Hamaoka nuclear power plant in Omaezaki, Shizuoka Prefecture, was shut down because of fears that a massive Tokai earthquake will occur.

What type of earthquake would this be and could a huge quake occur only in the Tokai region? Is the Hamaoka facility at greater risk than other nuclear plants?

Let’s consider the possible damage from tsunami caused by Tokai, Tonankai and Nankai earthquakes, which experts say could occur in conjunction, as well as the risk to nuclear power plants and the possible impact on the supply of electric power.

As his reason for requesting the shutdown of the Hamaoka plant, Prime Minister Naoto Kan cited an 87 percent “probability” that a magnitude-8 Tokai quake will occur within 30 years.

The 87 percent figure was released by the government’s Headquarters for Earthquake Research Promotion, but the headquarters regards it as a so-called reference figure. It is not a probability in a scientific sense.

This is because no massive Tokai earthquake has occurred in isolation in the course of recorded history.

Why then have scientists assumed that a large Tokai quake can occur at any time?

Along the Nankai Trough stretching from off the Tokai region to off Shikoku, strong ocean-trench earthquakes have repeatedly occurred every 100 to 150 years.

There has not been a massive earthquake in the Tokai region since 1854. Thus scientists assume that distortion in the Earth’s crust has continued to accumulate.

The forecast of a huge Tokai quake was first put forward by Katsuhiko Ishibashi, professor emeritus of Kobe University, who announced his theory to an academic society in 1976.

The government devised special legislation to improve systems for forecasting the quake. The 87 percent probability figure was based on the frequency of past Tokai quakes that occurred in tandem with Tonankai and Nankai earthquakes.

Also, research on documents preserved at temples and shrines, and on material deposited by tsunami in a wide range of areas, has not confirmed the occurrence of an isolated Tokai quake.

More than 60 years have passed since the 1944 Showa Tonankai quake and the 1946 Showa Nankai quake.

The headquarters has warned that the risk of a massive earthquake along the Nankai Trough has been increasing yearly.

According to Prof. Koshun Yamaoka of Nagoya University, “The possibility of an isolated Tokai quake can’t be ruled out. But since one hasn’t occurred in the past, the headquarters’ probability figure is not meaningful.”

However, Yamaoka added: “When the next Tonankai quake occurs, it’s highly likely a Tokai quake will happen in conjunction with it. Taking that into account, I estimate the probability of a Tokai quake within 30 years to be at least 70 percent.”

This megaquake and the ensuing tsunami killed more than 20,000 people and destroyed at least 80,000 houses.

The government’s Central Disaster Management Council has estimated that if only a Tokai earthquake were to occur today, the damage would reach 37 trillion yen and 10,000 people would be killed under collapsed buildings and in the ensuing tsunami.

But should a megaquake hit on the order of the Hoei quake–involving simultaneous ruptures in the Tokai, Tonankai and Nankai zones–large tsunami are expected to hit an area from the Izu Peninsula all the way down to Kyushu. The council estimates damage would range from 53 trillion yen to 81 trillion yen, the death toll would reach 25,000 and 550,000 homes and buildings would be destroyed.

Since the destruction left by such a quake has been predicted to be on par with that caused by the Great East Japan Earthquake, many seismologists are working to advance research on the issue.

“Earthquakes in 887 and 1361 must have involved simultaneous ruptures in all three zones [Tokai, Tonankai and Nankai],”said Yoshinobu Tsuji, associate professor at the Earthquake Research Institute of the University of Tokyo.

Tsuji has studied ancient documents at Horyuji temple in Nara Prefecture that describe a tsunami that hit Osaka after the Shohei Nankai earthquake in 1361. The writings say the tsunami reached about one kilometer farther inland than the wave following the Hoei quake.

A text from the Heian period (794-1192)–“Nihon Sandai Jitsuroku” (The True History of Three Reigns of Japan)–describes enormous tsunami damage to Osaka after the Ninna Goki Shichido earthquake in 887.

“It’s already been more than 300 years since the Hoei earthquake. Judging from the frequency that’s been recorded, there’s about a 30 percent chance of a major earthquake occurring soon in this region–one where a rupture in one zone happens at the same time as quakes in the other two,” Tsuji said, also saying detailed preparations needed to be made.

Meanwhile, the Keicho earthquake that occurred in 1605 did not involve strong earth movements, but the subsequent tsunami caused extensive damage from the Kanto region to Shikoku.

This earthquake occurred at a shallow point under the seabed near the Nankai Trough, which triggered a major tsunami via a mechanism different to those caused by the simultaneous ruptures described above.