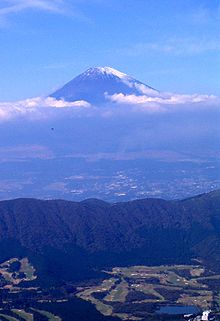 Big earthquakes have led to volcanic eruptions in the past, but while seismic activity has picked up at Japanese volcanoes, experts say an eruption is not imminent.

Although crustal movements considered a precursor of volcanic eruptions have not been observed, experts said they would keep an eye on the situation.

The surge in seismic activity has been observed in active volcanoes ranging from the Kanto region to Kyushu.

The volcanic islands of Izu-Oshima, Niijima and Kozushima in the Izu island chain have also had greater seismic activity.

In Kyushu, Mount Tsurumidake, Mount Garandake, Mount Aso and Mount Kujusan have greater activity as do Nakanoshima and Suwanosejima islands in the Nansei island chain.

According to officials of the Japan Meteorological Agency, while there was an increase in earthquakes in the vicinity of the volcanoes following the magnitude-9.0 earthquake on March 11, the number of quakes has since decreased.

Near Mount Fuji, a magnitude-6.4 earthquake was observed March 15, and aftershocks followed.

Within a radius of 5 kilometers from the peak of Mount Yakedake on the border of Nagano and Gifu prefectures, there is usually only a few quakes a month, but the number increased to more than 350 over the course of a week.

In the vicinity of Mount Hakoneyama, which normally gets about two earthquakes a day, 1,050 were observed in one week.

Volcanic areas that showed increased seismic activity after the quake

Akio Yoshida, who heads the Hot Springs Research Institute of Kanagawa Prefecture, which observes earthquakes at Hakone, said, “There is no doubt the earthquakes were triggered by the March 11 earthquake.”

There have so far been no observations of crustal movement and volcanic tremors that are the normal precursors to volcanic eruptions.

However, it is not unusual for volcanoes to become more active following a major earthquake.

According to Masato Koyama, a professor of volcanology at Shizuoka University, major earthquakes can shake clumps of underground magma. Earthquakes may increase after pressure on the magma clumps changes due to crustal movement or seismic waves.

In 1707, a magnitude-8.4 series of earthquakes hit the Tokai, Tonankai and Nankai regions. Forty-nine days after the chain of earthquakes, Mount Fuji erupted.

After the 2004 magnitude-9.1 earthquake off the coast of Sumatra, Indonesia, earthquakes became more frequent at more than 10 volcanoes in the region over a period of several months. Mount Merapi on Java Island erupted about 16 months after the huge earthquake.

Koyama said, “There will be a need to keep an eye on whether volcanic activity increases over the next month or two.”

Toshitsugu Fujii, chairman of the coordinating committee for prediction of volcanic eruption, said, “While there is no clear cause and effect relationship with the Great East Japan Earthquake, it would not be unusual for a major earthquake to have some kind of effect.”

(This article was written by Chikako Kawahara and Ayako Suzuki.)