Ginkgo trees have many associations with literature and legends in Japan. They are an essential part of fall hanami for the last of the golden fall colours to be seen. The leaves are huge and when they drop, on tree-lined streets,  I see people struggling to sweep up all the leaves.
Once when I visited the temple at the top of the hill on Enoshima island, the ginkgo fruit were strewn on the temple grounds making the whole place smell like an unmaintained toilet. So to avoid this unpleasantness only the male species are now grown for avenues and parks. 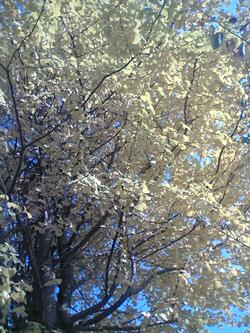 Below is a Japan Times article by Linda Inoki on the ginkgo tree.
IN BLOOM

In the last few weeks, I have been watching the old ginkgo (Ginkgo biloba),bem trees in the grounds of a temple near where I live turning a rich golden color. The trees that guard the temple from the northeast always keep their leaves longer than the ones in warmer positions. But a spell of wind and rain suddenly brought down the remaining leaves, which looked beautiful as they fluttered in golden showers across the dark, tiled roofs. No wonder these unique, fan-shaped leaves have figured in Japanese art for centuries. This year, the female trees in Tokyo have produced a lot of fruits, perhaps due to the very hot summer. If you have been walking under ginkgo trees in the last few weeks, you will have noticed the rather unpleasant smell from these fleshy, amber-colored fruits. However, they have the attractive name of ginnan (silver apricot), and the waxy seed kernels are often added to savory egg custards and other puddings in autumn.