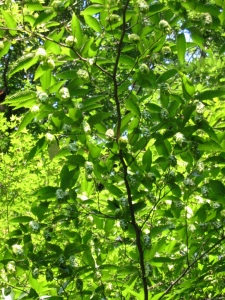 In the satoyama around where I live, I can see often Japanese hornbeams. They are easy to spot with their serrated leaves. There are five native species of hornbeams.

In this week’s copy of the Daily Yomiuri newspaper was an excellent nature feature which taught me a lot about Japanese hornbeams. Below is an excerpt of parts of the article:

“In Japan the lowland forests are often dominated by two types of trees–oaks and hornbeams. Oaks, with their characteristic acorns, are among the most familiar trees to people throughout the northern temperate zone. Hornbeams, on the other hand, are far less known. Many English speakers have never even heard the word.

Hornbeams are classified in the genus carpinus and are members of the betulaceae, or birch family, which also includes birches themselves, as well as alders and hazelnuts. Several dozen species of hornbeam are distributed across the northern temperate zone, mostly in Asia. There is one species, the American hornbeam (C. caroliniana), native to North America; and another, the European hornbeam (C. betulus), native to northern Europe and Britain.

Hornbeam wood is incredibly hard and the common English name means “hard-as-a-horn-tree.” There are also various alternative names, such as ironwood and musclewood, that reflect this characteristic. In Britain the hornbeam is a native species, but has also been widely planted and often “coppiced.” Coppicing is a traditional form of sustainable woodland management in which young trees are cut down and allowed to grow back from new shoots that arise directly from the stump. Wood from hornbeam coppices was traditionally used for fuel and also for chopping blocks and cogs in wooden machinery.

Hornbeam flowers bloom in early spring, just as the new leaves are coming out. Male and female flowers are arranged in separate clusters. The male flower clusters hang down in long catkins. They release their copious amounts of pollen to be carried off on the wind, then wilt and drop off when empty. Female flowers are smaller and less conspicuous, forming in bristly clusters at the branch tips.

Nuts hidden at the base of the bracts

By summer, however, the female flowers are already developing into clusters of tiny nut-like seeds. Each seed is attached to the base of a leafy structure called a bract. When the nuts ripen and drop off in autumn, they remain attached to their bracts, which then act like miniature sails, catching the wind and carrying the seeds far away from the parent tree.

Here in Japan we can find no less than five species of native hornbeam, generically called shide or soro in Japanese. By far and away the most common of these in lowland woods and coppices is the inushide (C. tschonoskii), literally “dog-hornbeam.” This tree has smooth, thin bark with wavy, irregular vertical lines of light and dark grey. The trunk is lumpy and fluted, a condition often described in English language field guides as “muscled” or “muscular.” Like most hornbeams, the leaf edges are densely lined with sharp teeth. A close look shows that each side vein ends in a large tooth, but there are also two or three smaller teeth packed in between the larger ones.

Out here in the north Chiba Prefecture rice paddy countryside grows one other species of native hornbeam, the kumashide or “bear hornbeam” (C. japonica). The kumashide is an endemic species, which means that it is found only in Japan. Generally speaking, the bear prefers higher altitudes than the dog, and as such is much rarer in the lowlands. An informal count indicates that only about 1 percent of the hornbeams in my local area are bears.

From a distance these two species look very much alike, but up close they can be easily told apart by the different shapes of their leaves and nut bracts. The bear’s leaves are longer and thinner than the dog’s, with many more side veins. Also, the bear’s nuts and bracts comprise tightly packed clusters that look like hops; while the dog’s have a more open, scattered appearance. It is the dog’s clusters that give rise to hornbeam’s Japanese generic name. Shide are those little pieces of white paper that are cut in a zig-zag pattern and wedged into the shimenawa ropes used to delineate sacred trees and areas around Shinto shrines. 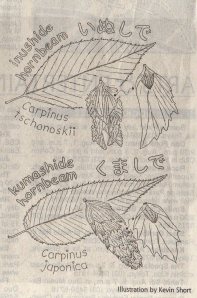 In the Kanto region countryside farmers and foresters tend to call hornbeams soro rather than shide. Although some locals disparage the trees as being too hard to work, there is clear evidence that they were traditionally coppiced along with the oaks. Their hard, strong wood was in the past used for making furniture and in handles for various farm tools, as well as for manufacturing charcoal.

The three other species of Japanese hornbeam are the akashide (C. laxiflora), which is common from hilly land up into the mountains; the sawashiba (C. cordata), which grows along mountain streams; and the iwashide (C. turczaninovii), the rarest species, thriving only on dry, rocky mountainsides.

Open deciduous woodlands are the best spots for cooling off. The trees are spaced well apart and the undergrowth is sparse, allowing the breeze to blow through. The soft green light filtering through the thin leaves of the deciduous trees also has a soothing effect.”

Short is a naturalist and cultural anthropology professor at Tokyo University of Information Sciences.

Reference source: NATURE IN SHORT / If you go down to the woods today, look out for oaks and hornbeams (Jul 31)